My interest in sacred geometry began through an intense experience I had at a very special place in the city of Bukhara, in 1997.
I had the pleasure to be in a group that travelled through Usbekistan and Turkmenistan, visiting mausoleums and tombs of spiritual masters that taught under the Sufi Tradition. They were known as the “Khojagan” or the Masters of Truth. They were behind the reconstruction of the land that took place at the time of Timurlane (1336-1405).

In that special day, I laid down in the floor beneath the tomb of Bahauddin Naqshbandi and  gazed to the cellar that was covered with colorful geometrical shapes around a circle and in the form of stalactites, a wonderful sight. My eyes could not leave the view and after some time a deep happiness came, a strong feeling of connection, of communication, a feeling of “being spoken to”.  It was something out of my control, it was like being, becoming part of a flow, being instructed and guided into a language beyond words. I could have stayed there for days, in that state of deep joy.

When I came back I stayed in my future home in Tuscany, the main house had to be rebuild and I was living in a beautifully small stone house, electricity coming from the sun, alone for 6 months. 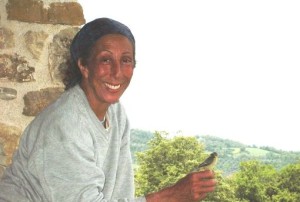 I began woking up at night and I had to draw, it was a strong impulse and mostly I was drawing the same form or variations of it. It was a geometrical shape. Little by little I could discern an internal octagon – symbol of transformation and that the combined lines of the drawing represented the arabic letters 7, 8, 6 arranged in four directions.
The 786 in the Abjad system – where numbers represent concepts – is the „Bissmillah, Ar-Rahmann, Ar-Rahim“ – „In the Name of God, the Most Compassionate, the most Merciful“. 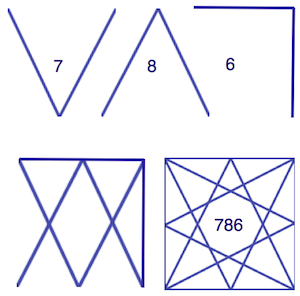 These insights gave me a profound sense of gratitude and of being guided, gave me motivation to continue.

Later on I got to know that this drawing was known and used in antiguity and also that it was the herald in the family of my sufi master.

Also my attention was constantly driven to the geometrical shapes of wild flowers – pentagons, octagons, spirals – confirming the saying – „Nature is the language of God“
In the weekends I travelled to Orvieto, Florence, Siena and visited special places that were indicated by my master, most were  cathedrals and small old churches. In all of then I found pictures, mosaics, engraved marmor stones (used as altar) with geometric shapes having as principle the square root of two. 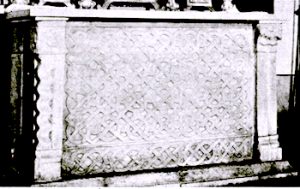 In antiquity, the ” root ” was a symbol of something “beyond the mind ” – because the diagonal of a square is a number that has no end, that was not touchable . The root symbolized a “bridge to the invisible world . Something that could be perfectly displayed not in number, but in form. But that was part of a secret doctrine and is already interesting that an altar was shredded into this form . Whether it is a mere coincidence or a kind of hidden message is will probably remain a mystery.

I took pictures and wanted to draw some of the drawings, sculptures and paintings that I saw in my excursions. It was not possible, I did not know how to do it. Almost by chance I began to read books about sacred geometry – almost all of them were very difficult, filled with mathematical expressions. It was like the base was missing – I had to learn the base all by myself. It took me almost four years and I read a lot of books – my knowledge of other 4 languages helped a lot, also the fact that I was leaving in Wolfenbüttel – and could go to the Herzog August Bibliotek, founded in 1572, where the most old books in the world can be found. After that time I had collected a lot of  very useful information about the beautiful proportions – like the Golden Mean or golden ration, the Fibonacci sequence, the square toot of 2, 3 and 5 as well as about Spirals and I was very willing to share what I had learned. So I created a Workshop that was them held in Brasil, Holland, Germany and Spain.

With our moving to live in Italy huge challenges had to be faced on how to develop our small company in the field of alternative energy and I stopped giving workshops. 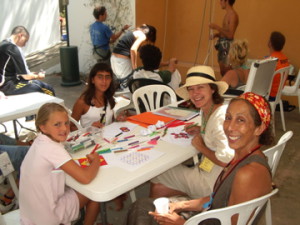 I AM SO GLAD THE MOMENT HAS COME TO SHARE WITH YOU what I have learned and still learn about sacred geometry, a way to the beauty of your inner being, the love,  wisdom and miracle behind all creation.

Insights and true connection, joy and deep love in this adventure are my sincerely wishes and my promise to you.

„New organs of perception arise with necessity, so make your necessity bigger“ Rumi.

With all my Love,