How do we perceive?

I begin by saying that only what we perceive is real to us.

The german expressin for to perceive  – Wahrnehmen is made of two words and describes beautifully that one „takes for true“ what one perceives.

it seems to me that we can talk about at least three levels of perception – the material level, the mental level and the level of function.

We perceive with our senses  diferent colours, shapes, movements, sounds, smells, tactile sensations  that is the material level.

We give names to what we perceive – this is a flower, this is a bird, and so on and we are told that these objectes are „real“, they form our reality. The names, the concepts, give us a kind of security, of knowing what is there.

Even when we admit that all „material things“ are in flux, in flow, coming and going, in movement, transforming, all the time, our senses still tell us that the solidity is what is real.The habit of naming is very practical and useful, at the same time it can give us a false sense of knowing and also a false image of the reality.

To make it very simple, at the mental level, if I say to a group of  people -„think of an apple“ and ask what they thought of, each one will describe a somehow different type of apple – with a variety of colours, sizes and shapes.

In the level of function – if one take a seed of an apple and plant it – it will produce an apple tree, that will produce other similar apples (not considering that nowadays it could be an hybrid).

At the levels of the material and of the ideas we have the power to influence and modify.

Now I ask – „what do we perceive from the energy“?

The word energy comes from the greek „energeia“ and means „actuating force“, in physics it is called „the capacity of realizing work“.

Energy can be measured according to the seize of its wavelenght or in how fast it moves, cycles per second – or Herz. A simplified spectrum is shown in the graphik below. 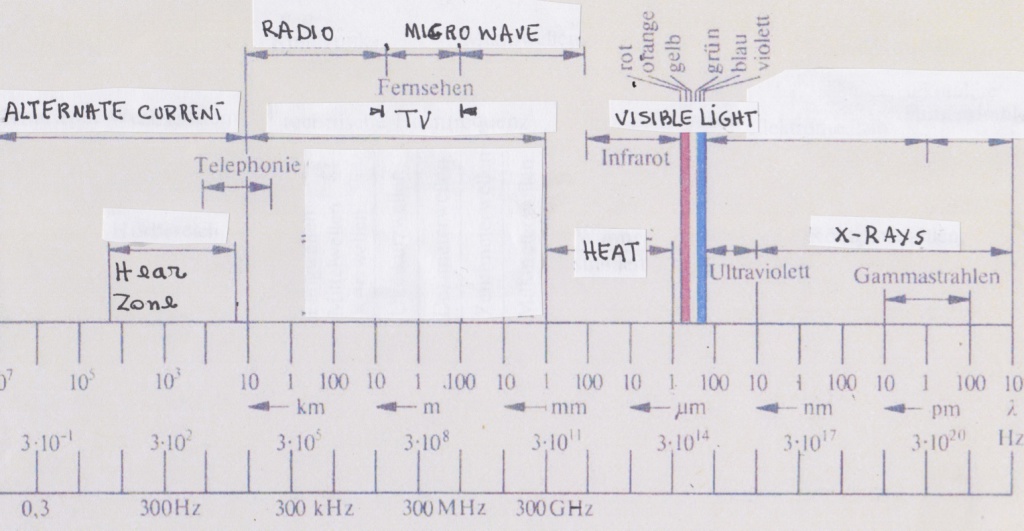 From the whole energy spektrum we can perceive just a very tiny amount – with our eyes as forms and colours and with our ears as sound. If we were able to sense in the range of X-Rays for instance, we would look at eacho other and see only the bones… if we were like a snake we would feel the warmth of the objects around us, if we were a bee we would see not a white flower in white snow but a dark flower.

The question is „What is reality and what it has to do with what I perceive?

In the next article we will go a step further in the spektrum of energy and how it relates to what we perceive.

You have Successfully Subscribed!